Can One Person Use a Two Person Kayak? 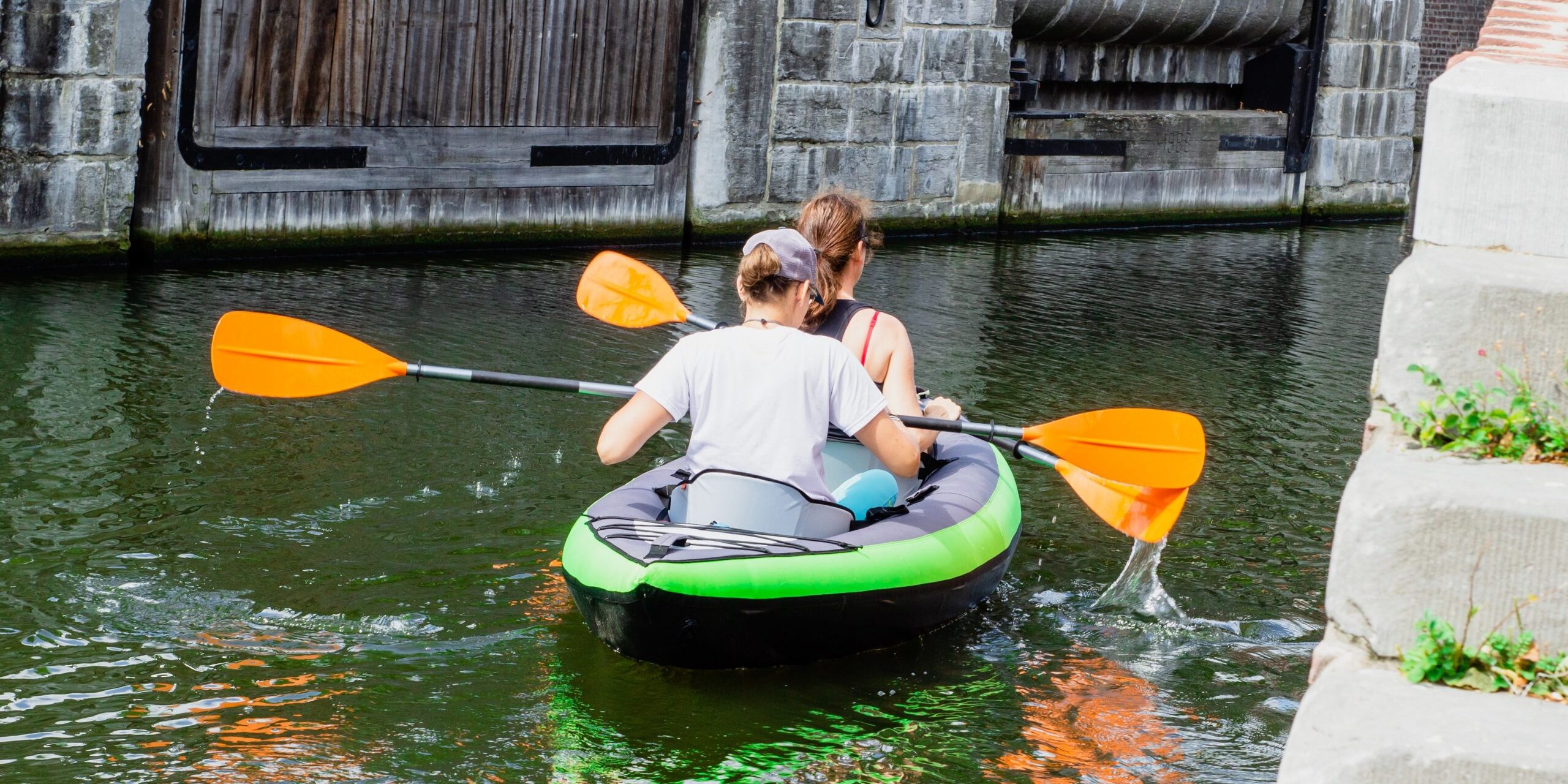 Can one person use a two person kayak? This answer calls for some discussion and learning about some factors that play as variables in kayaking.

Kayaking has become one of the most popular water-riding options. And why shouldn’t it be?

You can easily ride in narrow waterways, into deep water caves, and narrow water pathways with a kayak that only a human body can fit.

Well, you can visit the same areas with a small boat given that it fits in the pathway. But boats aren’t as flexible and lightweight as kayaks.

Herein, you can use a one or two seat kayak. We’ll talk about those in this guide.

What Is a Two Person Kayak?

When kayaks were first made, they were only single-seaters —one seat, lightweight, small kayaks. But with time, more kayak variations started to come. There came 2 seater kayaks, then 3 seaters, and then there are 4 seater kayaks too. 4 seater ones are very rare and hardly used.

Single kayaks are more in demand than 2 seater ones. Because when there’s only a single rider, the flexibility is greater, and maneuvering in the water is much easier. However, 2 seater kayaks are great as well. You can ride with your friend or wife in it. And though it’s less flexible, it can be more enjoyable.

Can One Person Use a Two Person Kayak? Million Dollars Question!

Yes, one person can sit in a two person kayak. But is this going to be comfortable? No. Let me tell you why.

Two seater kayak seating arrangements are done in a way that, when two people sit on the kayak, the balance is centered properly. Leaving one seat empty in the front or in the back will cause imbalance issues and an increased risk of kayak instabilities.

How to Sit in a Two Person Kayak?

Suppose you sit in the front seat. What will happen is the back of the kayak will get imbalanced with increased airflow in the back. If you plan to sit on the back, the oppositewill happen. The airflow will reach the empty front seat and make the front area unstable.

To achieve the optimal balance of riding, you should have a kayak with adjustable seat placement. Some kayaks have it. They basically have a mechanism that allows it to move seats front and back. If you’ve got one of these, then place the seats in the middle.

Some people like to use an extra seat placed in the middle. This will work too. What you should try to achieve to get a good balance is by sitting in the middle. How you do this depends on you. But that’s the single best way to get proper riding stability in a two person kayak.

Fishing in a kayak is a popular hobby, and if you plan on doing this, then maybe you should know the problems of doing this with a tandem kayak.

Tandem kayaks, to allow more room for multiple seats, have less storage room. In the time of fishing, the best to use is a boat. Because boats are larger and have enough fish storage space. You get almost none of these benefits in a kayak.

The less space makes moving sidewise quite problematic. And even if you’re able to catch some fish while sitting in an uncomfortable position, you’re going to find it somewhat tricky to store a good amount of fish in a tandem kayak.

But if you use a single-seater kayak, the flexibility is higher, and balancing while fishing becomes so much easier.

Some people think of choosing an inflatable kayak for fishing, thinking it might be lightweight and easily carriable. Although it’s true that inflatable kayaks are very portable, it’s not the right tool to use while fishing. These kayaks are not comfortable by any means.

Let’s now look into the differences between single and double seater kayaks. Both have advantages and disadvantages. Learning about these will help you choose the right one depending on your needs.

Let’s talk about both the advantages and disadvantages of single seat kayaks.

Since you’ll ride a single seater kayak alone, the flexibility with it is unlike anything else. You don’t have to wait for your partner to join — you can ride anytime, anywhere that you dream of. There are no constraints to what you do with a single person kayak. It’s the most flexible and private riding option.

Although learning to ride a kayak can easily be learned by most, some people find it difficult. There are solid reasons behind this too.

Basically, a single-person kayak is narrow and small. When a rider sits on it, the center of gravity gets quite high. Unless the rider is capable of quick maneuvering techniques, it might get quite complicated to keep his balance on the kayak.

Moreover, since it is narrower than a multi-seater kayak, it moves sideways easily. If the rider is a beginner, especially a child, it can be risky and troublesome for the rider to ride on the single-seater kayak.

Also, this narrow design is one of the reasons why beginners find single seater kayaks unstable. The more movement there is, the less control the rider gets. And the lesser the maneuver controlling abilities, the higher the risk of falling off of the kayak.

Unless you’re the only person in your family who’s into adventure stuff, you’ll most likely end up in a situation that calls for more kayak riders. If you’ve got a single seater, then you’ll need to buy more of it to accommodate more riders.

You’ve got two options to go for now. If you choose to buy more single seater kayaks for each of the riders, the cost will get staggeringly high. Single seaters are, usually, quite expensive. But if you choose double seaters, then you can get some good value for your bucks while saving a large chunk of money.

Let’s talk about both the advantages and disadvantages of two seat kayaks.

Do you think flexibility is all that you expect while kayaking? Getting some flexibility is nice but what’s great is to share the enjoyment of riding with someone.

You can take your husband or wife with you for some time to relax in your stressful schedule if you’ve got a multi seater kayak. Or maybe you’ve got a friend who’s got the same knack for adventure in his blood; take him for a ride.

Having someone with you as you ride through the beautiful waterways is exciting and fun. You can find tranquility as you ride alone, but that gets too boring after some time. Sometimes all it needs to make a good moment great is to have someone to share the enjoyment and have a conversation with.

Two riders initially may take some time to get adjusted with the speed and synchronization of one another. But when it finally happens, the multiple paddling force can become super strong and help both of the riders achieve a greater speed. Reaching high speeds alone is hard, especially if it’s for a prolonged period.

But when 2 pairs of feet paddle the boat with the same harmony, there’s less paddling pressure on each. Even with less foot stress, the combined speed is far greater than that of a single rider. But the issue is it might take some time to get used to, and once it happens, the rest is super enjoyable.

Two people may, even after trying for sometime, fail to achieve synchronization in their paddling patterns. And when this happens, it’s not a good feeling. One rider could be world-class yet if the other one couldn’t perceive the synchrony, the whole paddling movement would be basically useless.

Different paddling patterns in a kayak mean the kayak won’t reach optimal speeds nor will it stay stable on the water. It’s hard to continue riding with someone if the matching doesn’t happen. This is basically just a stressful ride in the end.

Kayak fishing is a common hobby. If you plan to do this, then maybe a double seater kayak isn’t going to be a good idea. The main reason behind this is the space limitation. Since there’s seating for two persons, the extra luggage space is reduced. If you plan to go kayaking just for the ride then this isn’t a big deal.

Hopefully, you’ve got some ideas on kayaking and found your answer to can one person use a two person kayak? It’s possible if you’ve got the options. Everything boils down to two things – riding stability and comfort. If you’re able to manage both these together, then you can surely ride in a two-person kayak alone easily.

How Many Calories Does Kayaking Burn? Answer Might Surprise You!

How to Get Bike Grease Out of Clothes

When Do Bow Sights Work Best?

How long does it take to bike a mile? (Explained In-depth)