What should you do when approaching a low-head dam in a canoe or kayak? Safety First! 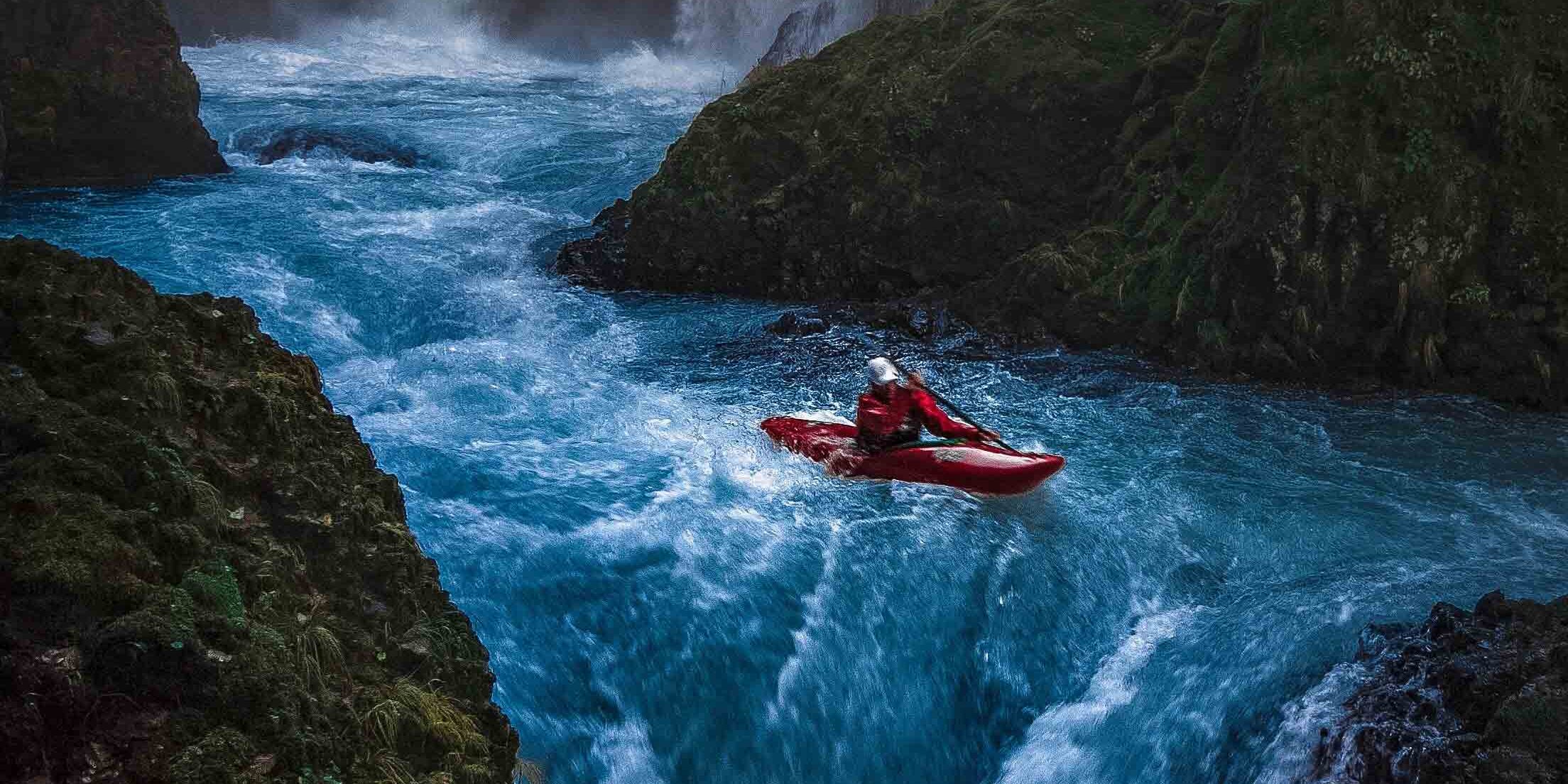 Before kayaking out onto open water, one must be aware of what he or she is about to traverse. But in some instances that we don’t exactly know what lies ahead nor there are any warning signals along the way, we find ourselves up against one of the most dangerous if not deadly structures in rivers or streams, a low-head dam. A weir or low-head dam while useful for what it’s built for can pose almost certain risks to kayakers or canoers. But, if we’re prepared enough and know about the safety to keep ourselves safe when kayaking or canoe and exactly what to do in times of an emergency, then we will have a high percentage of saving ourselves and traversing this obstacle easily. So what should you do when approaching a low-head dam in a canoe or kayak?

Read on and you might just save a life or two.

Click to View Article Navigation Click to Go
1 What is a low-head dam?
2 Elements involved in a low-head dam
3 So what makes a low-head dam so dangerous?
4 Other things to consider about these danger zones:
5 Things to do and safety tips when approaching a low-head dam
5.1 1. Prevention and Preparation
5.2 2. Wear a PFD or Personal Floatation Device
5.3 3. But what if you’re already in the river?
5.4 4. Signs that there is a low-head dam up ahead
5.5 5. What if you get caught up in the backwash (knock on wood)!
5.6 Safety First
6 The Aftermath
7 Conclusion

What is a low-head dam?

Dams are built for a lot of reasons and they are quite useful for a lot of applications. They come in all shapes and sizes too. Some are used to contain water, resources for power as in hydropower, and most commonly for flood control. While useful, dams can pose some level of danger to people and you’d be surprised to hear that the smallest of them all is also the most dangerous, the low-head dam.

Low-head dams are built to better control the flow of water in certain rivers or streams. These structures are only a few feet from the river surface and span its entire width. They make certain water channels easier to navigate, raise the river’s water level upstream, generate hydropower, and make water available for intake for supply or irrigation.

Across the United States, thousands of these low-head dams were built way back in the 1800s especially since electricity is not yet as widely available at that time. Since then, these low-head dams have become obsolete and are left without anyone managing them.

That’s one main reason why kayakers or canoers may stumble upon them when out paddling. Some local community, government, or operators may put warning signals such as buoys near these structures but most won’t have any, and accidents on these dams have been fatal.

Elements involved in a low-head dam

Before we proceed any further, let us familiarize ourselves with some terminologies and the parts of this structure. Knowing what you are up against is a good place to start to keep yourself safe around these structures. The elements you have to know before approaching low-head dam in front of your canoe or kayak.

Nappe–is what you call the sheet or the curtain of water flowing over the low-head dam or weir’s crest.

Backwash – this is the danger zone. Once you get caught up in the backwash it will be quite challenging to get out of it. This is water that’s flowing back against the dam face and may not support anyone efficiently for it is highly aerated.

Boil – the boil or boil line is where the point where the backwash and the outwash meet. It’s called like that because water at this point looks boiling due to all the bubbles formed.

Outwash – the water past the boil line flowing downstream. It is where you should aim to get for safety.

Tailwater–this is what the depth of the flow downstream of the dam is called and will determine the location of a hydraulic jump.

So what makes a low-head dam so dangerous?

A simple explanation is that the water going into the dam is in a subcritical flow. This tranquil water as it gets over the damn picks up a lot of speed thus becoming supercritical but you can be sure that once it reaches downstream it transitions back to subcritical thus creating a hydraulic jump.

Fast moving water, turbulence, and the location of this hydraulic jump is one surefire way to suddenly make seemingly tranquil water into a high-risk area thus making it dangerous for paddlers. As mentioned above, it also does not help that this area is highly aerated and affects the buoyancy of a boat of anyone. Also, the dam or the backwash spans the width of a river so it’s super hard to have any safety net in sight.

Other things to consider about these danger zones:

Low-head dams result in hundreds of fatalities and injuries yearly across the US so do be extra careful.

Now that you’re all too familiar with a low-head dam and the dangers it poses, as a paddler, you should know these safety tips.

The most effective way to lower your risk of going up against low-head dams is to avoid it altogether. Check the weather conditions, study the area or the river that you are going to traverse. This is advisable for locals or not, or for pros or novice paddlers alike. No exemption as we are talking about your safety.

Even expert paddlers won’t dare get caught up in one, and what makes them experts, to begin with is that they’d know beforehand that a low-head dam is within the expanse of the river they are about to traverse. Even with a rescue team, it’s foolish to even dare.

As mentioned, it would help very little when you’re caught in the backwash but it’s still advisable that you wear one. Also, always keep an eye on warning signs, and if you can, bring a team of rescuers with you. Just keep in mind that the low-head dam can be a very dangerous for canoe or kayak when its approaching in front of you in unconcise mind.

3. But what if you’re already in the river?

Our advice? Paddle away or paddle towards the shore or river bank. Once you do and you want to continue, portage your canoe or kayak walk around the dam and start paddling away downstream to continue your journey. Make sure to go significantly away from the boiling line.

4. Signs that there is a low-head dam up ahead

Always be wary of these signs as you paddle just in case there’s a low-head dam up ahead then you know what to be wary of.

5. What if you get caught up in the backwash (knock on wood)!

There’s a reason why the backwash is called the keeper and it’s because it’s a trap! Even rescuers if not planning ahead can easily fall victim to these hazards in our rivers. What to do when you’ve fallen in?

Once you’re about to fall into the backwash then chances are you are already off of your kayak and you need to either swim for the side or swim for the bottom. Yep, there’s a chance that you won’t get caught up within the endless powerful cycle of hydraulics.

There’s a path that will lead you downstream. If you dive down deep and then swim as powerful as you can even with little buoyancy across the boiling line. If this ain’t working as hard as it may be, try to swim on either side.

That’s why your knowledge of the river is important. Certain weirs won’t go the width of the river and you might make it to much safer areas where the water cycle is no longer dangerous.

Also, try a change in body position as this might change the flow of your direction. You may try to dive down, relax your body, and roll it like a ball. What about not getting off your boat, to begin with?

Your kayak or canoe when you’re tethered to it might sometimes pose an additional hazard to yourself. When the hydraulic is already slamming onto it and to the wall. So it might be wiser to just separate yourself from it. There are some expert maneuvers though that make use of the kayak to get yourself out of the current we won’t go there anymore.

Should you be taking off your PFD? This is one of the most debated topics if one is caught up in hydraulics. And yes, there are some pros and cons to either taking your life jacket off or keeping it on.

Some do say that your PFG will quickly become an enemy once you’re trying to get out of the backwash. And yes, that may be true as the highly aerated water would go against it. But what happens if you do get out of the water and going downstream, but you’re already too tired or injured to swim ashore sand any rescue team?

The answer to that is that you might still drown. Experts do say that keeping your life jacket on is still your best chance of completing your survival maneuver onto safety.

Also, Please Don’t forgot to visit our another article on best water shoes for kayaking and best kayak fish finder reviews. You may find some necessary information form there.

When its comes about safety before approaching low-head dam in front of canoe or kayak. What are organizations, communities, or government doing about these abandoned low-head dams? Certainly, they pose a lot of danger so, what now?

As useful as they were, now that they no longer serve any purpose then it’s only right to remove them.

As they say, the worst thing about low-head dams is that they don’t look dangerous at all. To begin with, Don’t be fooled nor be foolish enough to take it on. If you don’t want to injure or suffer from the worse of the possibilities.

Be aware of your surroundings, study beforehand, and always think of safety first. Tell a friend about it, paddle away from these weirs and you might just save a life or two. Don’t ignore the signs, ask the locals, and listen to the experts.

Best Time to Buy a Bike: Works Only Under These Conditions

The Evolution of Why Do Cyclist Shave Their Legs

Camping World Stadium: The Place to Be for Exciting Sporting Events

How to Wash Dishes While Camping: Everything You Should Know

What to Wear When Camping in the Summer: The Ultimate Guide

How to Keep Bears Away When Camping: The Do’s and Don’ts
Go to Top